This podcast is 12 minutes 41 seconds long.

A text version is available here

It is widely accepted that the more closely tied, integrated even, customers are in your development process for new products and services, the more likely success will follow. An April 13, 2008 article in the New York Times Magazine, “Can the Cellphone Help End Global Poverty – why a corporate ‘user anthropologist’ is spending so much of his time in the shantytowns of the world” (by Sara Corbett) sets a new standard. Nokia has Jan Chipchase wandering about the world seeking out what the next three billion cell phone users desire.

The first billion cellphones sold in 20 years; the second billion in four years; and the third billion in two. 80% of the worlds population live within range of a cellular network. The uses cell phones are already being put to in the underdeveloped world are quite unlike those in the developed countries. The only way to understand these and to begin to elicit input from new users is to go out and ask them, face-to-face. So, Nokia has full time personnel, on the ground, sending reports back to headquarters and trying out mockups of potential new products with real people.

It would serve everyone who is envisioning a new product or service to ask themselves: 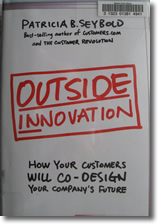 Patricia Seybold’s 2006 book Outside Innovation: How Your Customers Will Co-Design Your Company’s Future (Harper Collins, New York 2006) provides a broad review of many techniques used by a wide range of companies to incorporate customers and customer ideas into product design. The book is sufficiently current to include examples for web-centered customer environments. Ms. Seybold has gathered a large number of examples in varying market segments. This makes the book a worthwhile read just for these through examples. Unfortunately, the formalization of the ideas remains low. This makes this book look and feel like a collection of anecdotes. The book closes with “Five Steps to Outside Innovation”, “Five Core Competencies to Master”, and “Five Pitfalls to Avoid”. Unfortunately Ms. Seybold never really develops her copywrited, “Customer Scenario” to organize the methods and approaches to get beyond the notion that customer inputs to innovation are a series of “I want….” statements.